When a court renders a decision in a matter, it may write an opinion of that decision that explains its ruling. Court opinions can provide researchers with the court’s interpretation of statutes and regulations, and their application to a set of facts. Depending on the circumstances, these opinions can also make new law. In common law matters not covered by statutes or regulations, case law is the only source of primary legal authority.

In order to effectively locate applicable Georgia court opinions, a researcher must have a basic understanding of the court system. The picture below provides a visual representation of the Georgia Court System. Similar to the federal system, there are three basic levels of courts in Georgia: trial, intermediate appellate, and court of last resort. When conducting case law research, researchers will primarily focus on locating opinions rendered by the Georgia Supreme Court and the Georgia Court of Appeals. 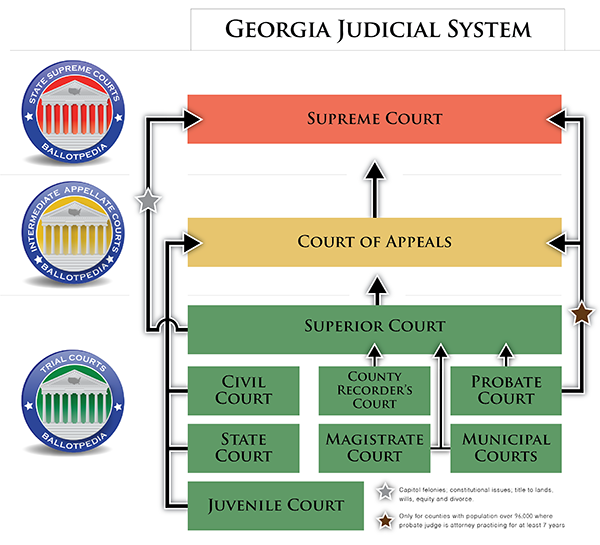 For decades, print case reporters were the only source attorneys used to access published case law.  While more researches are accessing case law online, it is still important to understand print case reporters. Only Georgia Supreme Court and Court of Appeals opinions designated for publication in a reporter will be binding authority in Georgia.

Georgia Reports (Ga.) is the official reporter of Supreme Court of Georgia opinions, and includes all published opinions since 1846.

Georgia Appeals Reports (Ga. App) is the official reporter of Georgia Court of Appeals opinions, and includes all published opinions since 1907.

Georgia Cases (S.E.) is a Thomson West reporter that includes only Georgia cases published in the South Eastern Reporter (S.E.). This is a useful set for researchers who only need access to Georgia appellate opinions, and also want to take advantage of West headnotes and references to the West Topic and Key Number system. Georgia Cases (S.E.) utilizes the same citation system as the South Eastern Reporter (S.E.), and is also in its second series, Georgia Cases, 2nd. (S.E.2d).

Regardless of whether you locate a case in a print reporter or through an online source, Georgia Supreme Court Rule 22 requires researchers to cite to the official Georgia reporters, Georgia Reports and Georgia Appeals Reports. It's also common practice for researchers to include a parallel citation to the regional reporter that contains the case opinion. An example of a parallel citation is Ponder v. Williams, 80 Ga. App.145, 55 S.E.2d 668 (1949).

If a researcher cites to an unreported case, Georgia Supreme Court Rule 22 requires researchers to cite to the Supreme Court or Court of Appeals case number and decision date.

When writing a memorandum or brief for submission to a state court in Georgia and citing a case from outside Georgia, such as North Carolina, researchers should cite only the regional reporter with the court identification in parentheses. An example is Woodson v. Bowland, 407 S.E.2d 222 (N.C. 1991).

While each citator service is slightly different, they all have similar features that allow users to perform the same basic functions. When updating a case, researchers should perform the following functions:

While trial court decisions and verdicts do no set legal precedent, attorneys may still find them useful when representing clients. Among other things, trial court verdicts can provide attorneys with information on how a judge ruled in a matter, and the amount of damages rewarded by the court.

There is no official reporter of trial court decisions. However, there are several commercial resources that researchers can use to access Georgia trial decisions.